If you don’t know what a Rainbow Loom® is – you probably don’t come into regular contact with kids between the ages of 7 – 12.   It is one of the hottest little trends out there, and it is yet another example of how we are all born makers, and how children in particular are driven with an innate ability to express themselves and make creative objects.   As I blogged about before The Makers Movement Intersects with the Minecraft Generation, I truly do believe that we are all born “makers” as Chris Anderson writes about in his book “Makers: The New Industrial Revolution” and as I profile in that blog.

So what is a Rainbow Loom (formerly known as Twist Banz), and what do you do with it you might ask?  It is, as you might have a guessed, a crafting kit that makes it (somewhat) easy for folks to knit together colored rubber bands (some even glow in the dark!) to create all kinds of wearable items, but mostly bracelets.  Here is a great NY Times article profiling Cheong Choon Ng, the Detroit entrepreneur/founder who developed the idea for the Rainbow Loom craft kit in the basement of his home in 2011.

As with Minecraft, the Kurke household is participating in this crafting trend – my youngest son has been creating all kinds of bands and bracelets for trade (and yes, gulp even sale!) in his elementary school.   I just ordered today another 3000 (yes, that’s right, 3000) rubber bands from Amazon so that he can continue with his “making”.  I watch him with fascination as he spends free time creating these intricate creations (there is a whole community of folks that have posted “how to videos” on Youtube, as with Minecraft).  I am amazed again when I realize that many of the posted videos have been made by kids – for kids – teaching each other how to use their Rainbow Loom. 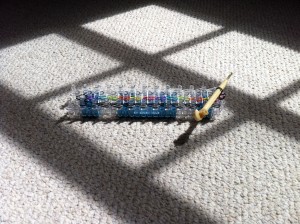 Pictured above is a Kurke WIP bracelet on a Rainbow Loom.

What will it take for a Rainbow Loom like “app” to unlock the potential demand for consumer 3D printers?   The Rainbow Loom phenomena certainly makes clear that something which is challenging (e.g. you just don’t turn it on out of the box) is not an impediment to kids.  So, while I continue to believe that substantial work needs to be done to simplify the capture/modify/make ecosystem (e.g. easier 3D model capture, simplified printing workflows that don’t require seven different software applications, etc.),  Minecraft, Rainbow Loom, etc. seem to show that something which is hard, but has a low barrier to initial entry, is not an impediment to making a market for kids.   In fact, you can even argue that the challenge is part of the reason why the Rainbow Loom is taking off – kids show (and trade) their more advanced creations as badges of honor – and teach others how to make them for themselves.

If kids could go home and 3D print a bracelet, would it have the same impact or societal worth?  Part of the inherent value of the Rainbow Loom bracelets which get created/traded is the understanding that it took time (and in some cases significant time and learning) to “make” it.  Would it be the same if you could go home and push the “print” button?