My friends over at DEVELOP3D have a great June 2014 issue (click here to download, you will need to register first) – the cover story is one that is near to my heart, namely the intersection of intellectual property and 3D content.

Starting on page 20 of the DEVELOP3D June 2014 issue, Stephen Holmes details the historical intellectual property battle between Magmatic Ltd. and PMS International Limited surrounding travel cases for children, the potential implications for the industry, and the campaign started by Rob Law (the founder of Magmatic) to re-visit some of these issues in the UK Supreme Court.  I urge you to register, download and read this (and subsequent!) issues of DEVELOP3D Magazine (either online or in print).

Magmatic Ltd. develops and sells a line of children’s oriented travel gear – including their range of Trunki travel cases, which come in different colors and graphics, but with the same surface profiles: 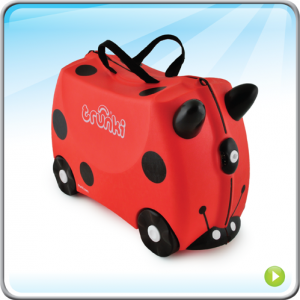 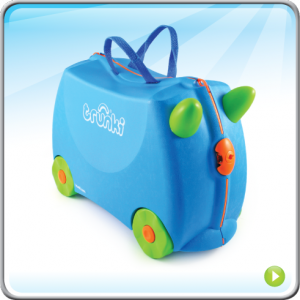 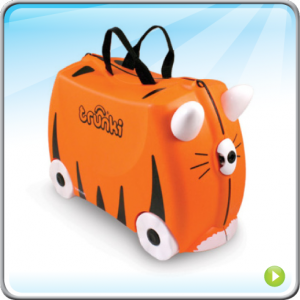 Magmatic had protected the Trunki family design via a Community Registered Design (a “CRD”).  While the metes and bounds of a CRD are outside the scope of this short article, the International Trademark Association (“INTA”) has published a very useful “fact sheet” on a CRD. Applications for CRD’s are not substantively reviewed, but at a minimum must contain a representation of a product design, and protect that specific appearance.

PMS International Limited (“PMS”) subsequently developed a competitive children’s case, called the Kiddee.  Magmatic sued PMS for infringing the CRD, its UK unregistered design rights in the design of the Trunki and its copyrights associated with the packaging for the Trunki.  The UK High Court found, in an opinion dated July 11, 2013, that PMS had infringed the CRD and the design right in four of the six designs. The copyright infringement claim was dismissed (except for one count which PMS conceded).  There is little doubt that PMS developed its line of children’s travel cases to be directly competitive with Magmatic — as nearly 20% of all three to six year olds in the UK owned a Trunki case (from Magnetic’s research).

In the United States we do not have a statutory intellectual property method akin to a CRD (copyright, trade dress, design patents, etc. can be used, but nothing that parallels the CRD).   Separately, you maybe interested in reading how a US and UK court examined the same set of facts and came to completely diverging opinions on whether an item was protectable by copyright (in this case it was a Star Wars Stormtrooper helmet.  See my earlier blog – http://3dsolver.com/the-40-or-20-million-helmet-or-not/ (US court concluded that the helmets were copyrightable, UK court held they were not because they were “functional” items in the context of a movie).

Magmatic appealed the High Court’s decision. On February 28th, 2014 the UK Court of Appeal rendered its decision (the “Appeal”) overturning the lower court and holding that PMS, with its Kiddee case, had not infringed Magmatic’s CRD for the Trunki.

Infringement, especially in the case of copyrights, registered designs, and design patents, is always a subjective one – there is simply no black and white test.    The decision on appeal here turned on the specific frame of reference the Court of Appeal used for the CRD infringement analysis, “[a]t the end of the day, the scope of the design must be determined from the [CRD] representation itself.” Appeal Finding 36.   In other words, how the products actually look in the marketplace isn’t relevant to whether a competitive product infringes rights in a Community Registered Design – what matters is the design and materials submitted as part of the application process.

The Court of Appeal reviewed prior decisions and found that:

[b]efore carrying out any comparison of the registered design with an earlier design or with the design of an alleged infringement, it is necessary to ascertain which features are actually protected by the design and so are relevant to the comparison. If a registered design comprises line drawings in monochrome and colour is not a feature of it, then it cannot avail a defendant to say that he is using the same design but in a colour or in a number of colours.

Appeal Finding 37.   The Court of Appeal concluded that the High Court had erred by concluding that the infringement analysis solely related to the shape of the suitcases – when distinctive design elements were present in the CRD beyond shape.  Appeal Finding 40.   The Court of Appeals found that the High Court was wrong in two primary respects: (1) the designs submitted were not wireframes (and so not restricted to shape), but were instead “six monochrome representations of a suitcase”. . .”which, considered as a whole, looks like a horned animal” Appeal Finding 41; and (2) because submitted in monochrome, the various shadings should be interpreted as distinct design elements (e.g. Magmatic could have been depicted the wheels in a similar shade as he rest of the body, but chose not to).  Appeal Finding 42. 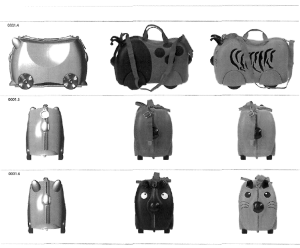 The Court of Appeals then evaluated the various Kiddee cases to decide whether those produce the same overall impression on the informed user (the CRD infringement standard of review) and concluded that they did not – the Trunki case design (as submitted in the CRD) gave the overall impression of a “horned animal” whereas the various Kiddee cases looked like a “ladybird” with “antennae” and “a tiger with ears. It is plainly not a horned animal. Once again the accused design produces a very different impression from that of the CRD.”  Appeal Finding 47.   The Court of Appeals also found that the color contrast between the wheels and the rest of the body in the Trunki CRD were a distinctive design element which were simply not present in the Kiddee cases.  Appeal Finding 48.  Ultimately, the Court of Appeals found that:

[T]he overall impression created by the two designs is very different. The impression created by the CRD is that of a horned animal. It is a sleek and stylised design and, from the side, has a generally symmetrical appearance with a significant cut away semicircle below the ridge. By contrast the design of the Kiddee Case is softer and more rounded and evocative of an insect with antennae or an animal with floppy ears. At both a general and a detailed level the Kiddee Case conveys a very different impression.

Many commentators have said the practical takeaway guidance from this decision is that those seeking protection via a CRD should generally avoid surfaced 3D representations in their CRD filings, and instead use wireframes.   The logic is that if only wireframes are used, then surface markings, color, etc. are irrelevant in a CRD infringement analysis.  Since at least one part of the Court of Appeals decision focused on the purposeful difference in the wheel color chosen by Magmatic, that would have been irrelevant if they had used wireframes.

I am certainly no expert in UK law, nor that relating to CRD registrations, but I do not believe that this case represents bad law, as much as it does a bad set of facts for the Plaintiff, Magmatic.   If Magmatic had submitted wireframes as part of their CRD, then PMS would have most certainly first claimed that the CRD itself was invalid because it wasn’t novel or possess enough individual character to warrant protection – the very things that colors, surface markings, lettering, etc. can bring to a simplified shape which make it more unique and protectable as a CRD.   It could be argued that many of the design elements were functional, and therefore not protectable (e.g. cases need wheels, they have straps, clasps, etc.) – particularly if depicted as a wireframe.

Ultimately though, if Magmatic had submitted wireframes for its CRD, wouldn’t it still have looked like a “horned animal” as opposed to an “insect” to the Court?  Look at the above images and ask yourself.  Their position might have been stronger (if the underlying CRD were deemed to be valid), but would it have changed the outcome?